Welcome! This is a post that covers in great detail the differences between Windows Azure Web Sites (App Service: Web Apps as they are now called - this article will just refer to them by their original name) and Windows Azure Web Roles (azurewebsites.net vs cloudapp.net). It was first written a couple of days after Web Sites was first released, but I have been keeping it up to date as changes to Web Sites are announced. There is a change log of updates at the bottom of the post and I have struck out content that becomes out of date over time. There is also a good official Microsoft post that gives a similar comparison, but  not quite as comprehensive that you can also refer to.

Shameless Plug: If you are interested in using the power of Azure Web Roles with the nice deployment experience of Azure Web Sites then check out the AzureWebFarm and AzureWebFarm.OctopusDeploy libraries I work on.

The Windows Azure Training Kit has a slide with a really nice overview of the three options for deploying web applications in Windows Azure (note: Virtual Machines are outside the scope of this post): 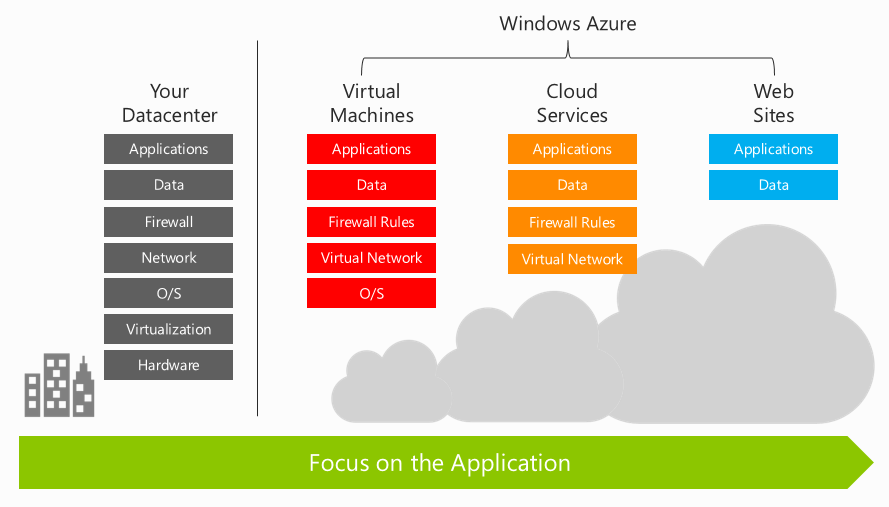 Options for deploying websites in Azure and comparison to on-premise hosting.

Sometimes Virtual Machines are a valid choice - check out my whitepaper on deploying web applications in Azure for more information.

In most other scenarios Web Sites is the best choice since it’s the simplest option and is fully-managed. The Web Sites platform is being constantly innovated on with new features surfacing almost every month – Microsoft are investing a lot of resources into making sure it’s a state of the art platform. If your application grows in complexity over time and needs to migrate from Web Sites to Web Roles or Web Roles to Virtual Machines this is a relatively easy process so you should be able to start with the simplest option initially (Web Sites) with confidence you can change later if required.

Long-story short: Convention-over-configuration IIS-as-a-service to get you up and running quickly in Azure with a minimum of fuss (kind of like App Harbor). Also, it allows you to use a certain amount of Azure resources for free (10 websites on shared instances with limited bandwidth), which is a welcome addition and will be great for proof of concepts or just playing around with stuff!

The advantages that Web Sites seems to have over Web Roles are:

With all that in mind, this is what I see as the advantages of / situations you would use Web Roles (a lot of those also apply to Virtual Machines, but that is outside the scope of this post):

While reading up on this post I found out something about Web Roles that I didn’t know - apparently you can deploy a Web Role package that contains multiple web sites (by specifying their host headers), but it does mean that you have to always deploy all the websites at the same time and keep them all in the same Visual Studio solution.

David Ebbo send me a message via Twitter to let me know the solution he is using to remember his Git password. Also, I found a post that describes how to point to other NuGet feeds than the official one when using package restore.

I read a truly excellent post yesterday about Virtual Networks and it made the point that you can’t join a Web Site to a Virtual Network, but of course you can join a VM or Web/Worker Role. Thus I added that as another limitation above.

There were a few big announcements today about Azure Web Sites and I’ve updated this post with some minor corrections accordingly.

Added some rather obvious differences I originally missed thanks to the comment below from Roland.

Updated to add the fact that Traffic Manager isn’t supported for Web Sites.

Updated to add a note about CDN support as pointed out by Teo below.

Overhaul of the post to get it up to date with recent changes to Web Sites and Web Roles as well as a general tidy up and making it more friendly (e.g. added diagram, new intro and tl;dr section and moved around some of the points that were in the wrong section).

Added information about GDI+/Report Viewer as pointed out by Travis below.

Added note about the web.config options for configuring IIS that are increasingly being opened up for Azure Web Sites.

Added some notes about App Service: Web Apps and added information about the TiP feature.

Added note about access to performance counters as pointed out by Matt below.